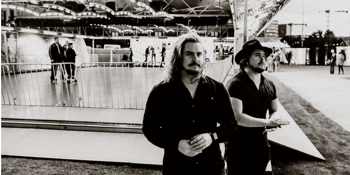 with special guests Jack Botts
Miami Marketta, Gold Coast (Miami, QLD)
Saturday, 28 November 2020 6:00 pm
38 days away
18 Plus
Music
Send this event to
Hey everyone, since postponing the regional tour at the start of the year we had hoped we wouldn’t have to cancel any shows, or organise a workaround, but we can’t hold it off any longer. Since we don’t know when borders will open, our shows in QLD have been cancelled, you’ll be able to get your refunds from the ticket outlets.
As for NSW & VIC we’re still hoping something can go ahead in a reduced capacity and hopefully you guys can bare with us until things become clearer.
Seriously f**k you 2020


After taking a year to write new music and tour their debut album ‘Atlas Shoulders’, Melbourne folk-rock duo Pierce Brothers are gearing up to release the first track from their sophomore album.
With a smooth pop acoustic vibe and strong call backs to their folk/roots beginnings, Kanko (Mountain Song) is their first release of 2020.

The twins reminisced, “we’ve taken some time off touring, for the first time in about 8 years, and this song is about going to that place. Going to be free. Finding solace and freedom in the mountain air. That’s what Kanko is, a mountain I (Jack) visited in Japan. It’s also the name of my dog.”

Kanko (Mountain Song) is the first new music released from Pierce Brothers since 2018, having toured across the globe playing arenas supporting Tash Sultana, as well as massive AAA festivals in North America, Europe, and Australia.

18 months of global touring culminated in an 18 track live album “Three Deep Breaths”. Recorded at 15 different locations across the globe from their favourite shows, encapsulating the live energy Pat and Jack create.

Having established themselves as an integral part of the folk, blues & roots community in
Australia and abroad, the band of brothers have toured relentlessly – honing their craft and gaining fans across the globe as they go. The band’s music has grown with them over the years and has seen them release a top 15 ARIA debut album (Atlas Shoulders) and two Top 10 ARIA EPs (The Records Were Ours and Into The Dirt), received over 10 million global streams, as well as over 1 million YouTube views.

After a well earned break the boys are popping over to South Africa to headline Splashy Fen Festival, before heading back on the road for the largest regional tour of Australia they’ve ever embarked upon.
Pre-sale announced Tuesday March 3
Tickets on sale Thursday March 5 Tickets at www.piercebrothers.com