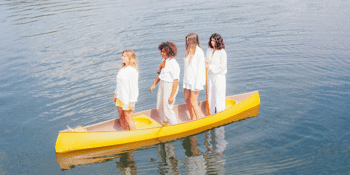 Comprised of Gemma, Emily-Grace, Daniella and Tanisha. This all female, moody surf / psych quartet are rapidly winning over hearts with their highly energetic and captivating live performances and charismatic personalities. Since forming in March 2018, The Oogars ooze confidence and charm, blending together beautiful harmonies with jangly guitar, surf beats and mezmorising synths to create fun, moody beach rock reminiscence of The Growlers, War Paint and La Luz.

These four ladies have released their first single ‘ SCREAM’ in mid march 2018. Receiving plenty of attention on triple J home and hosed, what youth and Aussie local radio stations, clocking up over 10,ooo streams in only 2 months of releasing. The Oogars recently returned from their first EUROPEAN TOUR around Spain and have just finished the recording of a much anticipated EP. Which will be released late May 2020 ready for an up coming national tour . These ladies are already on track to become one of the Gold Coast’s most exciting exports to date, you won’t soon forget the name - The Oogars.

LUJA MURFI
Formed in Gold Coast 2019, Luja Murfi are a group of four friends drawn together on a musical journey. Inspired by elements of psych, rock, funk and jazz, the group are developing a sound of whimsical and mystical grooves to radiate and alleviate.