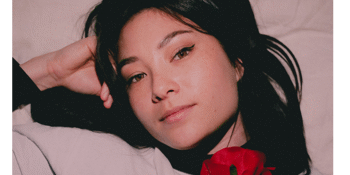 San Mei AKA Emily Hamilton began her musical journey at the keys of her family piano, a consequence of a love ingrained and inherited from her dad’s favourite Beatles records and penchant for classic 60’s pop.

San Mei is enamoured with the transportative nature of music, her guitar heavy, delay-ridden, dreamy pop explores the hyper-blaze of existence and the intricacies of the in between.

Family and home have always been integral to Hamilton’s creative process. The daughter of Chinese-Malaysian and New Zealand born parents, her family immigrated to Australia at an early age.

Her parents, resilient and sacrificial, nurtured and encouraged her creatively, instilling in her a gift that she would lean on heavily to help diffuse and navigate the chaos of growing up and forging her identity. Using art as therapy, her songs became a conduit for escape and to shoulder the loss of her mother.

Armed with just a MIDI-keyboard and a Macbook San Mei was born.

As San Mei evolved sonically, the DNA of her creativity began to take tips from her guitar-driven heroes Black Rebel Motorcycle Club, The Kills, Metric and Yeah Yeah Yeahs, whilst drawing inspiration from alt-pop visionaries like Grimes and Lykke Li.

San Mei shrugged off the bedroom-pop producer epithet and landed in the fuzzy world of dream pop, fused with over-driven, psych-tinged guitars, and atmospheric synth melodies, and this is where she found her sonic shelter.

Emerging from the haze, came her first full EP: Necessary, co-produced by upcoming, and in-demand producer Konstantin Kersting (Jungle Giants, Mallrat, Tia Gostelow) which garnered attention from triple j, with lead single ‘Rewind’ being added to rotation with the follow up single ‘Until You Feel Good’ landing on global new music playlists and tastemaker digital radio.

Taking on Dawson as a producer has challenged and galvanized the sonic evolution of San Mei. The collaboration saw the pair refining ideas, exploring soundscapes and laying the foundation for San Mei’s sonic progression, in a collection of new works.

Finding freedom in the creative harmony of their partnership, Hamilton explained

‘[Dawson and I] hit it off straight away and it seemed like he understood where I was coming from, even if I had trouble conveying certain ideas in the demos I made at home’

Of these demos, Hamilton offered the first single ‘Wonder’ in early 2018.

“Wonder captures the classic butterfly’s moment when someone unknown to you captures your attention, and you’re not sure why. It’s about that person becoming a mysterious daydream to you, wondering who they are, what they’re about, and that feeling of not knowing if you want them to become anything more than some intoxicating illusion”

‘Wonder‘ quickly rose through the Hype Machine ranks to number one in 10 days, along the way being added to full rotation on triple j, and San Mei became the Unearthed feature artist the week of the release. This cemented her momentum in the top ten most played unsigned artists on Triple J and catapulted her towards a spot on the coveted BIGSOUND festival, a stepping stone to export to the world for artists like Jack River, Middle Kids, Gang Of Youths, Stella Donnelly and Courtney Barnett.

Heaven followed on in the footsteps of singles before it, hitting high-rotation on triple j, and broke through borders with a debut spin with Radio X's influential new music DJ Maz Tappuni. It went on to a feature with BBC Radio's Next Wave with Jack Saunders.

The momentum of the year and its successes culminated in 'Heaven' becoming the soundtrack to San Mei's debut major festival appearance at the iconic Falls Festival, as well as her announcement on 2019's SXSW Line Up.

San Mei went on to conquer SXSW stages with a mammoth nine shows in six days. This behemoth of a schedule sent industry buzzing, and gained San Mei a new loyal US following, with many soon-to-be-announced partnerships.