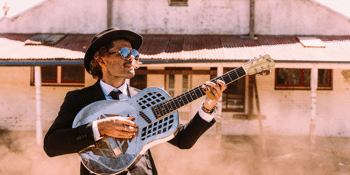 After selling out a first and second  shows in just hours,
ASH GRUNWALD

will be performing a 3rd limited capacity solo show at

With regions of Australia getting excited to see live music again, Ash will be revisting his latest album - MOJO as well as performing some of the stripped back one man band foot stompers he is famous for!

Released in August of 2019, MOJO is a modern classic Blues record which features The Teskey Brothers, Joe Bonamassa, Kasey Chambers, Mahalia Barnes and many more.

"...“Ain’t My Problem,” a ripping barroom throwdown that features some help from fellow Aussie blues-rockers The Teskey Brothers." Relix Mag

Upon release , Grunwald said, "At this point, Mojo represents a journey through my own valley of darkness, and out the other side into the fresh sunlit glory of optimism and positivity. This may sound like a cliché, but when you've lived it, it feels very different. Mojo is a five year documentation of the twists and turns of a turbulent time in my life. It is my life's work up until this point." (Bloodlines Music)

"...Grunwald's deep, soulful tone is the star of the show." Stack Magazine